In the last handful of years, I’ve had a creeping sense that blog readership is dropping across the web, even as the quantity of organizations and people producing posts has grown. Stats, unfortunately, are hard to come by. Most all of the readership data is from blogging’s golden era — 2001-2012 (or so) — when several reputable organizations regularly published professional surveys. Now, there’s plenty on optimizing your blog marketing, but almost nothing I can find on whether blogs themselves are still consumed as widely, or subscribed-to as they once were. 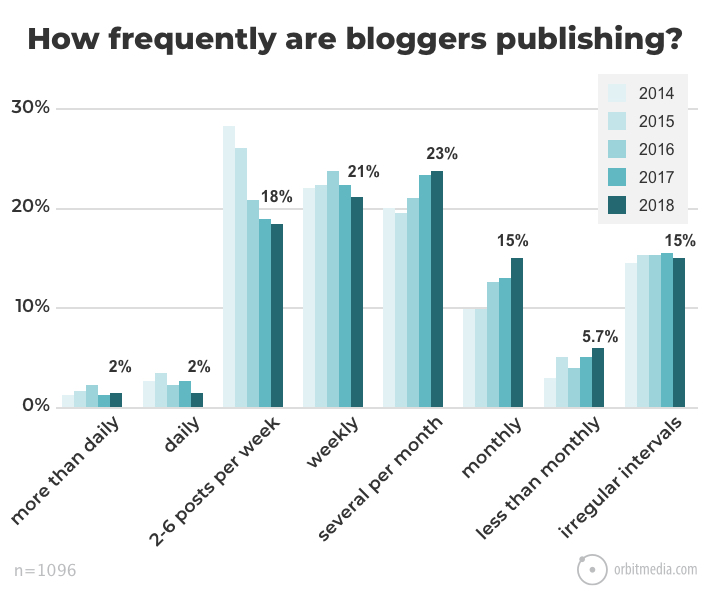 Blog publishing? According to OrbitMedia’s excellent survey, they’re still popular, though the frequency has dropped.

Blog readership? eMarketer’s estimates (the most recent ones I could find are from 2016) say it’s leveling off more quickly than population growth. An informal bit of research among my own network suggests there’s still decent demand, though it’s hard to know which direction that’s trending:

I think several big trends are the drivers here:

For any given form of content, or any given network on which that content might be amplified, we can compare the relative difficulty (or ease) of amplification against the adoption of the medium or platform. Usually, as things become more popular, it’s more difficult to stand out from the crowd:

Facebook is a good example of a network at the far, top right quadrant. It’s ubiquitous, and content does indeed “go viral” on that platform every day. But the difficulty of earning that amplification for a content creator or marketer is immense — so much so that Facebook is no longer a preferred network for most forms of marketing. When something does hit on the network, it’s more because of an impossible-to-reproduce accident or difficult-to-reverse-engineer stroke of luck than an intentional marketing attempt.

Conversely, on a small network like Indiehackers (a site I love, BTW), much of the content reaches all of the network, and amplification isn’t particularly challenging. If a savvy marketer attempted to reach the Indiehacker community, the difficulty level would be generally low (though the value of that effort is also low). I tried to illustrate this on a similar chart:

Reasonably people can quibble about where, precisely, a given network should fall along the axes, but in general, the rule holds true: the more popular and powerful a network, the more difficult it usually is to amplify content and reach more people via on it. This same principle works for content formats as well:

Blog posts are ubiquitous. They reach a huge number of people, but it’s fairly difficult to stand out from the crowd and reach a large audience. Memes might be generally easier, but there are fewer meme consumer and meme-centric networks. Scientific research papers may have significant reach inside a particular community, but the maximum group you might reach in any one of those is probably quite small.

Ten years ago, blogs were a content format that had been on the rise for the better part of a decade and continued to rise fast. Almost every content network — Facebook, Twitter, LinkedIn, etc — supported them and helped them grow reach. Now… That’s no longer the case. One could even argue that blog posts deserve a “declining use” red arrow in my diagram.

As a marketer, a founder, and a longtime blogger, this is troubling. But, when you’re in this business, change is the only constant and so, the reasonable questions to ask are:

My answers are, respectively…

1) Yes, blogging is still worthwhile if you’re either:

2) Blogging is one potential way for talented content creators to reach their audiences, but not the only one, nor the best one unless you are:

A) Primarily serving an audience that has a consistent, ongoing need for information around your topics (i.e. you’re likely to build loyalty b/c people consistently wanting content in this field)
B) Superb at short, written content designed to be consumed once, but hopefully referenced and amplified by a high percent of readers
C) Reaching an amplification-likely audience that posts to and engages on networks like Twitter, LinkedIn, Pocket, and Hacker News (vs. less-friendly-to-external-content networks like Facebook, Instagram, YouTube, Reddit, etc)
D)

3) Other forms of content creation and amplification that are worthwhile include:

A) Visual content (sites that are often unfriendly to externally-linked content like Reddit, Instagram, Pinterest, and Facebook can work well for this)
B) Video content (so long as you’re accepting of the low odds of success and higher barrier to entry)
C) Books, presentations, artwork, and other mediums that require massive amounts work and a publisher or gatekeeper’s approval, but that can vault your status or reach with even a single accepted project
D) Research studies, whitepapers, gated PDFs, etc. that smaller groups of people are willing to jump through many more hoops to acquire, and where each visit/download is worth much more to you

There are surely folks doing well with their blogs, but for every one that’s hitting their goals, there are likely 100, or more, that struggle. My guess is that will get worse, and that other mediums are following suit, or will soon. Podcasts, video content, Instagram posts, and temporal/disappearing “stories” are all experiencing waves of varying sizes in various fields. That growth won’t continue unabated. Like anything else on the web, there will be a rise, and a fall. If you’re a smart marketer, you’ll ride the waves and get out before the crashes.