Every month, hundreds of thousands of people search on Google for “upcoming movies.” And in the SEO and web marketing worlds, there are a lot of practitioners who’d argue that movie studios should be investing more effort into ranking in the lists, news items, and search results that show for those queries.

After all, according to the Moz Explorer tool, it’s a pretty darn sweet target — tons of volume, medium difficulty, high organic clickthrough rate… What’s not to like? 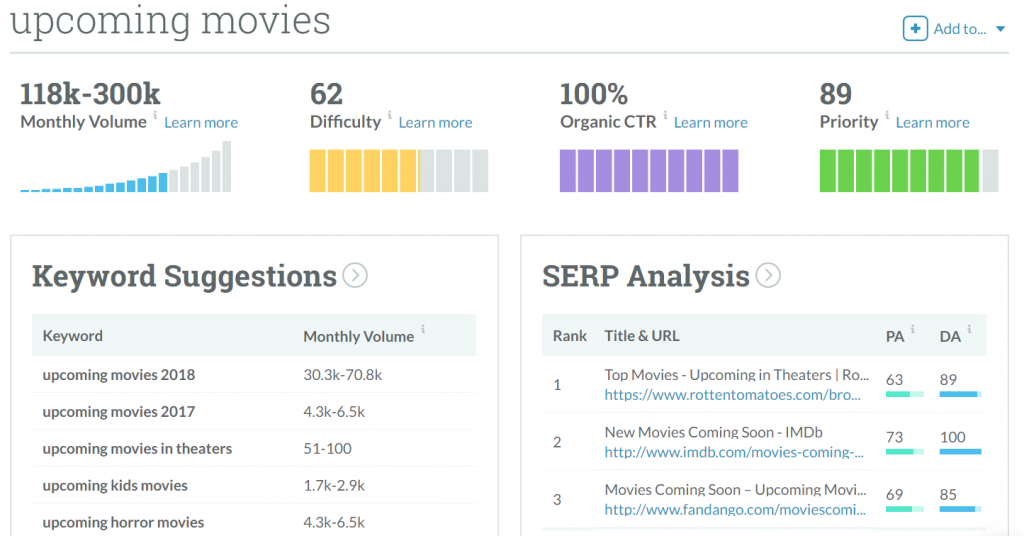 For search marketers in particular, it can be frustrating to hear that a studio is putting $50 million into a publicity and advertising campaign, but won’t put even $50K into SEO. We decry the lack of logic, the poor understanding of marketing, and the lost potential.

But there’s a wrinkle.

Above is a Google Trends comparison for “Mr. Rogers” (a beloved TV host who’ll be featured in an upcoming documentary) vs. the search query “Upcoming Movies.” Below is a movie trailer for that upcoming film: Won’t You Be My Neighbor.

The studio published this on YouTube on March 20th, 2018. Six days later, on March 26th, it had 2.9 million views. A couple days later, Google saw more searches related to this one movie than for “upcoming movies,” as a whole.

Even a deeply biased SEO professional would have a tough time arguing that the studio should have invested more into SEO for “upcoming movies” and the many related terms vs. focusing on a 1 or 2% bump in trailer views (after all, that trailer is probably *way* more likely to generate interest in actually seeing the film, than its appearance on a list of upcoming films for 2018 showing in Google’s results).

My latest presentation is all about this thorny problem — in many fields, for many projects, ranking for existing searches may actually be a worse marketing investment than attempts to grow total demand.

My goal is to share some ways that marketers at businesses large and small have invested in tactics that are familiar to web marketers — content, social, email, outreach, SEO — to grow demand rather than just serving existing searches.

The beautiful part is that branded search is one of the few areas where Google can infringe less (at least, not if it wants to keep serving users well), and where you don’t have to spend a ton of energy keeping up with your competitors.

Rather than fighting over the scraps of “vacation rental” SERPs, you could become the “AirBnB” of your space. Even if that goal feels too lofty or unachievable, investing in that path may bring greater returns than you expect.

p.s. Thanks to Will Critchlow, Lynsey Little, and the team from Distilled’s Searchlove conference series for hosting the inaugural version of this live presentation.