You’ve likely seen the news today that Moz made its first major acquisition. It was an exciting, rewarding day at the office and an invigorating one for our team, particularly the Followerwonk folks. We’re still a very young company and so this is a bit of a test for us across the board. Acquisitions are notorious for having challenges around team fit, technical compatibility, value to customers, and long term ROI. I’m hopeful that many of those potential issues can be overcome with Wonk, and to date, I’m feeling great about it, but I know we’ll need to stay vigilant. 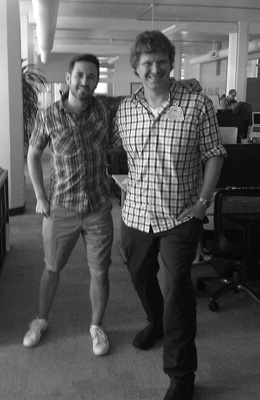 Peter & I at the Mozplex today

As we think about acquisitions going forward, we’ll almost certainly be judging them against the Followerwonk deal. In my opinion, it ticked all of the checkboxes a company might seek in an acquisition at our stage:

There are a few things that are frustrating about acquisitions. The major one I found with both Followerwonk and another company we’ve been in early talks with is establishing trust. Acquisitions at early stages often have a lot of upside built into retention as well as reaching milestones. This means the acquired folks have to feel extremely confident that acquirers won’t take the property, fire them, and run. Sadly, it’s not uncommon. And it’s why we have to work uncommonly hard and in uncommon ways to earn that trust, e.g. the exchange below:

Remember how I said Sarah was awesome?

If your company has an acquisition offer, you have every right (and probably an obligation) to be highly skeptical and methodical in your analysis of whether the new company makes sense. If you suspect they might cut and run, there’s absolutely no reason to go through with a transaction, so I’m assigning no blame here. It’s merely the nature of the beast.

Another challenge is the legal folks. No offense to lawyers, but the incentives for legal service providers in transactions suck. Basically, the acquirer sends out an LOI (Letter of Intent) to the company they wish to acquire, and if they’re generous and genuine, it typically includes a provision to cover legal fees up to a high, but reasonable amount (usually in the $10-50K range depending on complexity).

Since the attorneys can see this LOI, they know exactly how much they can and should work toward earning. Thus, even if the transaction’s extremely straightforward and all parties generally agree on the points, their incentive is to create back-and-forth discussions on the little stuff, and even sometimes foment fear and mistrust to create greater need for more legal language and more modifications so they can reach that maximum legal allowance. I brought up this challenge to Brad & Michelle, but their response was basically, “yeah, it sucks. But you gotta deal with it.” Oh well.

One last thing I don’t like in many acquisitions that I’ve heard about frequently (all second-hand) are performance-based metrics. I might write an entire blog post around this topic someday, but for now, I’ll just note that I’m suspicious of their value. Let’s say, for example, that in the Followerwonk deal, we’d required a certain number of new free trials or a numeric goal for decreasing PRO member churn before a given payout. That seems like a reasonable and a good way to build incentives on both sides on its face, but it actually kinda sucks (on both sides). Very often, those milestones depend on cooperation between the acquirer and acquired (which means more required trust-building), and resources/freedom/flexibility devoted to the project.

Problem is, in startup land, shit changes all the time! The goals and metrics we established in May 2012 might be totally different from what we see a need to accomplish in May 2013. Our team or ability to devote resources might shift. The market demands might change. Yet it’s unrealistic to update the contract with every pivot. Hence, it’s my strong preference to have simple, retention-focused goals. I figure, if Peter & his team are still here in 2 years, they’re going to be doing awesome, kick-ass stuff that we all agree is the right thing to do. Why worry about paying out more or less based on particular milestones and numbers that might no longer be strategic? If they’re putting their trust in us, we should return the favor and put trust in them to do great work, just like any other member of the crew.

All these drawbacks only make a successful acquisition even more rare. I’m extremely confident about what we’ve done together with Wonk, but I know the odds are against us. That’s why I’m going to make it a priority to keep building the relationship and striving towards a positive long term outcome. I’m honored to have Peter, Marc, and Galen with us and I wouldn’t change today one iota.

I do hope that in the months and years to come, I learn a lot more about acquisitions (and hopefully not the hard way). In the meantime, I plan to keep writing about it on occasion as it’s a subject I rarely see covered, particularly from the acquiring party’s perspective. Who knows, maybe I can even convince Peter to write a bit about his thoughts on the deal! 🙂