One of the not-so-surprising facts about online dating is that short men and tall women tend to do poorly in comparison to their peers. If you’re a woman using an online dating sites, you can vastly increase the odds of finding a mate who matches all your criteria AND has many of the intangible qualities (humility, self-reliance, intelligence, humor, caring, etc) you may value IF you eliminate that single criteria.

The reason is simple. Women using dating sites tend to place a very high value on taller men, as illustrated below in OKCupid’s data on 1.5mm profiles messaging each other: 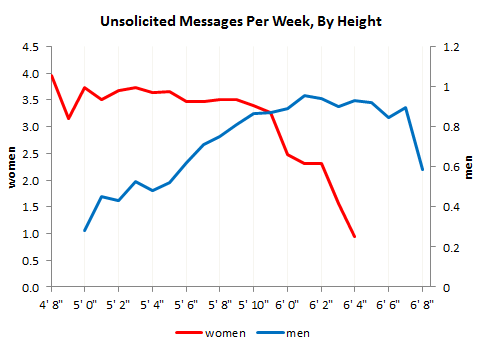 via “The Big Lies People Tell in Online Dating“

You can also see that taller women receive proportionately far fewer messages than their shorter counterparts. Most of us would make the assumption that women wish to date taller men and thus, shorter men are less willing to message taller women for fear of being non-viable candidates.

These are innate characteristics which human beings cannot change about themselves, and which are poor predictors of the things we believe to matter in relationships, that artificially and unnecessarily bias the romantic connections individuals make. This is illogical, yes, but we all claim to understand why the biasing happens and move on. I’d urge you to re-consider that course of action.

If you’re a shorter man, message taller women. Don’t be intimidated or put off by it. Check what OKTrends has to say:

The data also raises the interesting possibility that these tall women are much more likely to sleep with a man who does approach them. Compare the 6′ 0″ woman to her 5′ 4″ counterpart: the taller woman gets hit on about two-thirds as much, yet has had slightly more sex partners.

Fascinating, right? And I’ll bet the same phenomenon applies if you’re a woman seeking a man – opening up the possibility of shorter-than-what-you’d-normally-filter-out guys will give you far better odds of finding what you seek in a relationship.

Now apply this paradigm to the world of startups.

There are inherent biases that the “Silicon Valley” mindset crafts, proffers and spreads which are just like the height limitations in online dating. For example:

It’s my strong opinion that if and when you question biases that exist, you’ll find that many limitations you believed to exist are, in fact, arbitrary and foolish. By going against the prevailing trend and ditching the criteria used by the broader market, you can have far greater success.

At Moz, we’ve already found many of these to be the case. We’ve hired many employees who are over 50, women, mothers, can’t code, and/or probably wouldn’t have been considered (at least when they started) to be “10X” types. We chose to raise funding from Foundry at a lower valuation than we likely could have gotten on the open market. We’ve waited to launch products that were more polished rather than shipping early. We’ve built more test processes into our engineering team rather than “moving fast and breaking stuff.” We recently invested in a PR agency. We stayed in Seattle.

Choose short men (and tall women). Your success may depend upon it.