Last week, SparkToro launched our third free tool, a service that analyzes Twitter accounts to estimate what percent of their followers are bots, spam, propaganda, or inactive accounts. By far the account that’s been most checked by users of the tool is @realdonaldtrump. Since there’s great interest in that account, we decided to expand our usual sample analysis (which looks at a random group of 2,000 followers) and run every single one of the account’s 54,788,369 followers through our system.

The results are… interesting.

As you can see, @realdonaldtrump is vastly above the median for these types of followers. For comparison, here’s how a number of other prominent American politicians look: 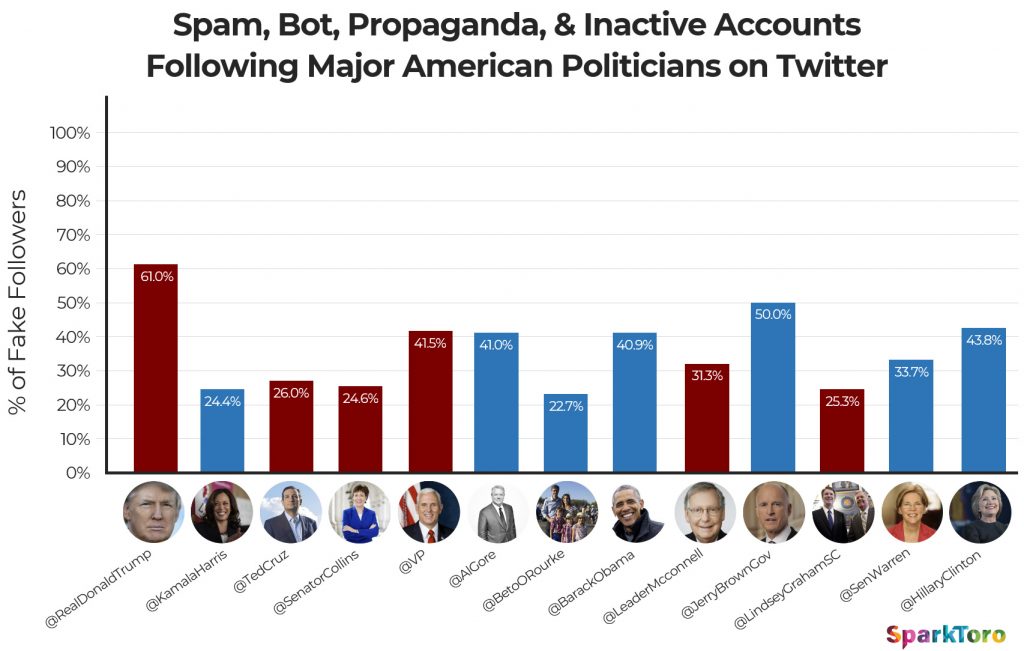 The @realdonaldtrump account has significantly higher numbers than any other American politician we could find. That said, a few accounts do eclipse this, including @tina_kandelaki (a Russian journalist and personality) with 82.0% fake followers and Demokrat_TV (an Indonesian news source) with 69.2% fake followers.

It’s not just the high percent of fake followers that’s surprising, but the distribution of follower quality on the account: 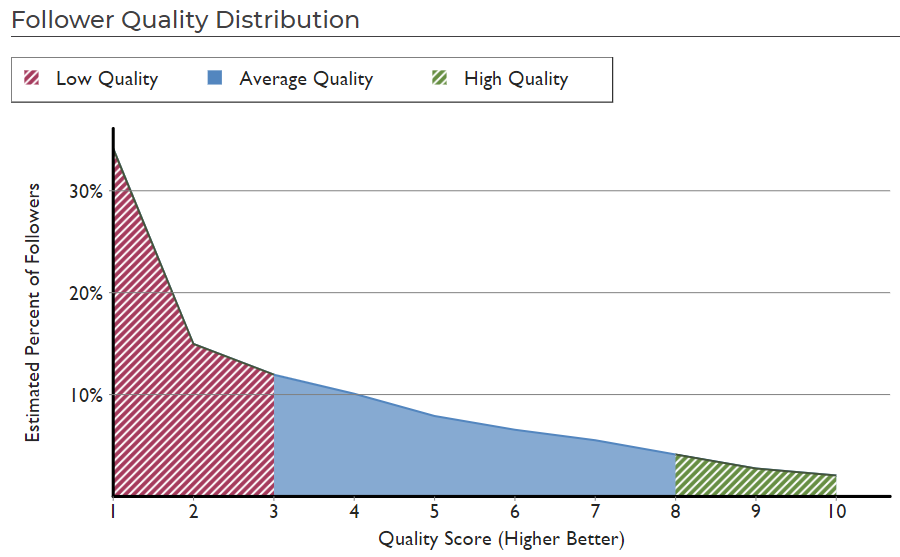 More than 35% of @realdonaldtrump’s followers are accounts that trigger 10+ different spam/fake follower signals (and thus have the lowest possible quality score, “1”). When compared to the distributions of other accounts, it seems likely that @realdonaldtrump acquired significantly more of these highly unusual and suspicious followers than others. We can speculate about why, but these numbers can make you feel confident in saying that the account likely reaches far less than half of the follower number reported by Twitter (at least, on that platform).

SparkToro’s analysis uses a machine-learning based process to uncover numerous signals that correlate with spam/bots/inactive/propaganda accounts. We then analyze how these signals compare for any given Twitter account’s followers. In a standard analysis, we look at a random 2,000 followers, but in the case of @realdonaldtrump, we analyzed every single one of the 54+ million accounts in question.

It’s extremely important to keep in mind that NO ONE SIGNAL means we’d treat an account as likely spam/bot/inactive/propaganda. An account needs a combination of 7-10+ of these signals to be counted as “fake.” Here’s how those signals stacked up for @realdonaldtrump:

I have this sinking feeling that someone will undoubtedly point to one of these signals and say “but that doesn’t mean the account is spam/bot/propaganda/inactive!” so let me state this again: no one, two, three, or even six signals means we’ll treat an account as low quality. But, I think we’d all agree (and the machine learning model built off spam+bot accounts would concur) that it’s very rare that an account could have a combination of 7-10+ of the above signals and still be a real, active, human being regularly logging into their Twitter account. Not impossible, just exceptionally unlikely.

For us, as creators of the Fake Followers tool, the fact that the estimated number was 57.1% (off the 2,000 sample followers) and the total number was 61.0% (off all 54 million) makes us feel very good about the sampling methodology.

For those who use the tool, you can feel relatively confident that numbers often line up to expectations and that sampling barely reduces the accuracy of a comprehensive analysis.

Notably, this isn’t the first analysis of that account’s followers. Newsweek wrote that about half of @realdonaldtrump’s followers were fake or inactive in 2017. Several linguistic analyses of the content have also been performed with interesting results.

One final note — while @realdonaldtrump probably only reaches ~20-25 million Twitter accounts directly, press, media, and other social media users amplify his messages to reach a broader group. But, for this account, and for others, the direct use of the published follower numbers on Twitter is a pretty poor estimate of true reach.