Email is a tough communication medium. Conveying tone, voice, attitude and disposition are all stymied by the the format. Efficiency is a good thing over email, but it can lead to suspicion of dismisiveness or even contempt by a reader. And the cycle of misinterpreted emails leading to bad blood between people is something we’ve all experienced. 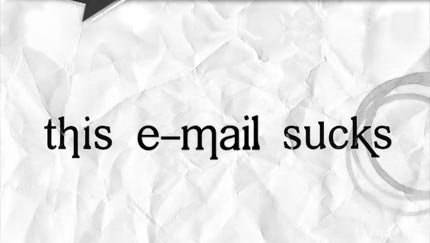 So how do we build a culture where emails are both A) effective communication tools and B) positive experiences that fit with the company culture?

There’s no simple answer, but there are a few things we’ve done at Moz to help. Many of these are experiments still in process, so they may not work perfectly, but hopefully they’ll help inspire or inform the thinking and applications at your companies.

This means that senior folks need to lead the way, by sending Mozzy, TAGFEE emails. One of my recent favorites came from Adam, our Chief Product Officer, who sent out an email last week about changes in the product team:

To be fair, the “new things that are good” emails are easy to send. Tough news can be much harder. Below is one of the hardest emails I’ve ever had to send to the team, just after our investment round in 2011 fell apart.

Side note – ZOMG am I glad we didn’t close that round and got Brad & Foundry instead. Did you know he called me last week just to see how I was feeling and to encourage me to take more time off? Despite the fact that he was having a tough time himself? That guy’s amazing. We’re so @#$%ing lucky to have him.

Re-reading that old email about the bad news from 2011, I like that it takes a positive tone without trying to sugarcoat the bad news. Bad news deserves as much, if not more, transparency than good news, but it’s hard to avoid talking openly about it without sounding desperate or rejected. My first version of the email didn’t do that, which is why I’m so glad to have the exec team to review stuff like this:

That first version sucked. It was really negative, and really hard on us and had a defiant, angry tone that may have been cathartic for me, but certainly wasn’t helpful to the team.

That lesson of leading by example is critical – and that’s why core-values-infused email communication needs to come from the top (or it will never work).

#2: Include Core Values in the Email Itself

When sending communication, I love literally using the words “Transparent,” “Authentic,” “Generous,” “Fun,” “Empathetic,” and “Exceptional.” I sent an email just today that does a bit of this:

We’d been having a discussion about covering hotel rooms for Mozcation Cape Town, and I worried that our standard policy of two nights of hotel wouldn’t be right when we’re asking staff to fly 30+ hours to get close to Seattle’s antipode.

Especially when we’re sending emails that are critical in nature, I find it really helpful to fall back on our core values as the architecture for finding a solution.

#3: Even the Smallest of Emails Have Impact (sometimes they matter the most)

A lot of email communication is short, action-oriented, and seems like it wouldn’t need much attention. But, the tone of “small” emails can be deceiving and if they’re not done in a positive, friendly way, they can build up bad relationships. I’ve had 1:1s with Mozzers who worried that someone at the company disliked them simply because they received a couple brusque responses over email that could easily be interpreted as just short and to-the-point. Don’t let that risk happen – put a tiny bit more care into short emails and you avoid the problem entirely.

In Joel’s email above, he’s just giving a few details about a video we filmed. It’s short, simple, and direct, but reading it, I can feel Joel’s happiness to help out, his desire to make the project easy on me, and a generally positive attitude emerging from under those few lines. It’s a great feeling, and one we should all strive to create in our emails, no matter how big or small.

#4: Emoticons, Exclamations, and Adjectives May Seem Like Fluff, But They Matter a Lot

Those smiley faces, exclamation points, quick replies with a short “awesome” or “thanks” instead of just letting the email hang – it all matters. From an efficiency standpoint, I recognize the reality that this costs precious minutes on every thread. But guess what? The value in creating a positive feedback loop and a positive communication thread is worth it. And, I guarantee that when there’s an emotional perception of negativity or that someone’s ignoring or not appreciating you, the lost productivity is far, far worse.

I’m certainly not suggesting every email has to be filled with inane, inauthentic, warm fuzzies. But I am saying that biasing toward showing positive emotion when you feel it over email goes a long way and, at least for us, is worth the small amount of lost time.

#5: When An Email Goes Awry, Call It Out ASAP

Don’t let bad emails fester. Don’t let them bug you for any longer than the time it takes to draft a “this made me feel uncomfortable” reply. If you’d prefer to do it in person, that’s fine, too, but make sure it gets addressed.

9/10 times, it’s my experience that misinterpretation of tone is the problem when it comes to email. There’s only 10% of the time when the intent actually didn’t match what you hoped it would – the rest is just how it felt. But by getting on top of those feelings fast, and opening the communication channels, you’ll be far better off.

I’m sure it will come as a surprise to no one that poorly worded or hastily sent email can cause lasting personal conflicts in a lot of workplaces. The “reply fast” tactic can help ease a ton of that pain.

Short, brusque, 2 word emails can sometimes be totally fine. A lot of emails don’t need flourish or context or emotional consideration IF AND ONLY IF you’ve already established a great, open, working, amiable patter of communication. That’s why those first 30 days and the first 30 emails you send and receive at a new company or on a new team are so crucial.

Our big data engineering lead, Carin, and I were discussing this at beer night this week – that when new people come onto her team, getting them up to speed on the massive complexities of the projects themselves is a big task. But, it can’t be an excuse for why we don’t also get folks up to par on culture – and email communication is a big part of that. This leads to challenges when existing people on a team know each other, know the types of humor and the kinds of emails that have worked historically, and can read the emotional vibe of their teammates from past experiences, but newcomers may not. We have to go above and beyond in those first few weeks to ensure healthy cultural growth.

Sometimes, the best replies are fun images from the web, copied & pasted into the body of an email: 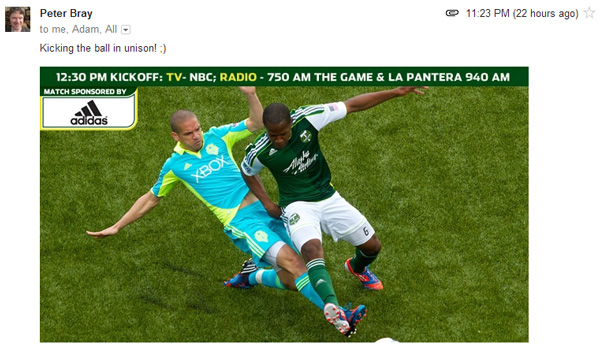 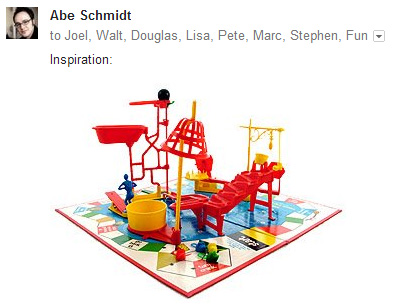 This kind of stuff makes email more fun to read. It makes it more fun to send. It builds a culture where people want to communicate in clever and original and unique ways. It makes me more excited to see my inbox and more likely to share it with Geraldine when we’re sitting on the couch together after a long day. And best of all, it lets all of us at Moz share a big, long, bandwidth-wasting, LOLing, remember-the-time-when inside jokes.

p.s. We send a lot of serious, work-focused emails at Moz, too. I just happened to highlight a lot of the more goofy stuff in this post.