During the worst weeks of this year, I’ve had this weird mental cycle that, despite being incredibly exhausted, keeps me awake. In my head, I’ve taken to calling it “The Loop.”

The Loop starts out with something small. I’ll be lying awake, in bed, trying to fall asleep, and thinking (as I do most of the time) about work. Some little tweak to a product I want to make will lead to a bigger challenge about resourcing which leads me back to the decisions of the past, which fills me with disappointment and frustration, which leads to pessimism about the future, which eventually leads to feelings of fear and powerlessness. It’s impossible to fall asleep when those emotions are coursing through me.

The Loop, I think, is fairly directly connected to Moz’s performance this year. We’re going to grow ~23%. That’s considered to be decent by a lot of startups reaching our scale, but I can’t get to a peaceful and accepting place about it.

Being this obsessed with dollars is pretty fucked up. I know that. But, I also know that I have all of my ego, my dreams, my friends, my family, and my personal narrative tied to this company. If it achieves great things, other startups will point to TAGFEE and to our IC track and to the focus we put on culture and people and say “that model works; maybe we should try it.” And if Moz is only a mediocre success or if, heavens forbid, it’s a bust, none of those things will happen, and then last 13 years of my professional life will have been wasted. I know that I need to separate my identity, at least part of it, from the ups and downs of Moz. Everyone has good years and bad years. Everyone makes mistakes. So, why can’t I forgive myself and my team and move on? Why?

And all of that is part of The Loop, too.

The Loop circles back to those bad decisions about a big bang launch and those missed dates and the foolish beliefs I had about how things would work out. It starts with a little issue, but it builds and builds until there’s a crescendo of regret and that horrible pessismism. That pessimism is something I’ve never felt in my career before. Even in the darkest days of being chased by creditors, I never doubted that we could turn it around. But late at night, lying in bed next to Geraldine, who sleeps like a log, my head can’t stop The Loop. The Loop convinces me that this time, the problems are too complex, the challenges are spread across too many people, and I can’t save it by myself like I could in 2004.

The Loop takes me away from the Rand I want to be. It’s stronger than sleep. Stronger than me.

When I find myself in that dark place, I try to go somewhere else. I usually try to imagine the world of Adventure Time.

It’s a cartoon show for kids, but I’ve watched every episode at least 3 times. I treat the show like a ritual. I’ll come home from Moz and watch an 11-minute episode to try to unwind and get to a different place. Or I’ll be working upstairs at night or on the weekends and call to Geraldine – “I’m going to watch my show!” And she knows. She knows if it’s “everything’s OK and I just need a break” Adventure Time, or a “I’m in the dark place again and I need to shut my head up” Adventure Time.

But now Adventure Time is becoming part of The Loop. It’s the part that comes when I’m digging out of the dark place and trying to escape pessimism and find sleep. And sometimes, it works, and I wake up in the morning, and I answer some emails, and get in the shower, and on my walk to work, I realize the optimism is back. And sometimes… The Loop.

Adventure Time ends and a new cycle starts up. I’m about to fall asleep and I remember an interaction in a meeting I need to address, and I try to sort out why it happened, and it all comes back to 2013 and 23% growth, and all the bugs we still need to fix in Moz Analytics, and the crazy AWS costs that ate up our budget because we thought we’d be on the private data center way before now, and all the bets we placed in 2012 thinking we had to spend our VC round to go faster, and… The Loop.

But for the last week, I’ve been sleeping. Not great, but better. The Loop usually only gets one cycle, and sometimes not even one. I haven’t forgiven myself, but the pessimism doesn’t seem to run as deep. Part of that is Sarah taking over as CEO. Part of it is Matt taking over product architect responsibilities for Moz Analytics. And part of it is therapy.

I’ve been seeing a woman who’s a combination of a professional coach and therapist. We spent 90 minutes on my first appointment talking about The Loop. I very nearly broke down when describing the cycle of being exhausted, overwhelmed, and just wanting to sleep, but not being able to reach it. She helped. We talked about ways I could intervene, and remove elements of The Loop. Many of them were incredibly simple – for example, imagining each concern as an individual module that I could place on a river, and float it away, so that once I’d thought about it, that thought was done and gone and I didn’t have permission from myself to think about it again that night.

She gave some homework, too: 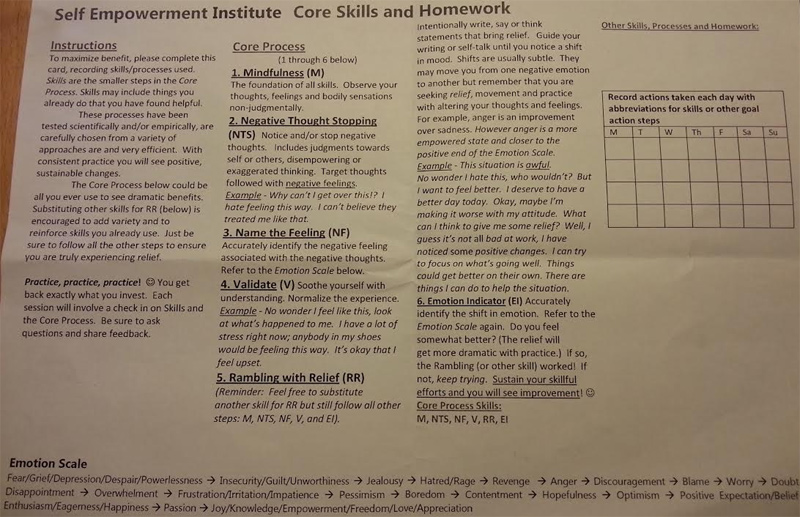 When we met again this week, I told her that I could scarcely believe that A) I hadn’t experienced The Loop strongly since our first talk and B) I had barely needed the techniques she gave me. Just knowing that I had ways to stop The Loop was enough to keep it at bay. That felt really good.

In the last 7 days, I’ve still been watching a lot of Adventure Time, but I’ve been warding off the dark place and stopping The Loop.  Tonight, when it started (around 1am), I decided to write this post. I have no idea if it will help anyone or if anyone will even be interested, but I think writing is a tool I can use to be mindful, and to name my feelings, and to validate them. And, yes, maybe even to “Ramble with Relief.”