2013 has been a really hard year for me. In many ways, it’s been harder than even the 2002-2006 era when my Mom and I went deeply into debt and worried about paying the rent and being chased by creditors. Some of that is attributable to the less-than-what-I-hoped-for results the business achieved (mostly because we artificially constrained our acquisition funnel from June-October between our rebrand and the launch of Moz Analytics), but a greater portion is due to the challenges of scale. 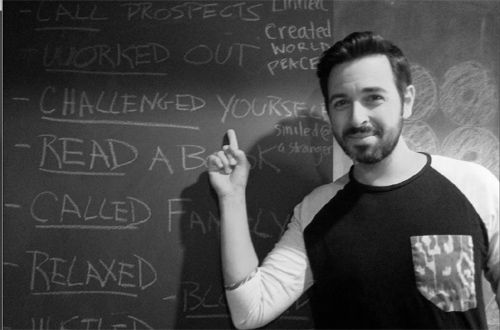 (taken at Wil Reynold’s house during our CEO swap)

Being a CEO at a 10-person startup, a 30-person startup, and even up to ~75 people at Moz was a truly enjoyable experience. But the growth from ~75 to ~135 today has been less fun for me. I’m still learning a tremendous amount, but I’m being challenged to such a degree on issues like organizational development, HR, conflict resolution, process building, and morale that I feel out of my depth, and poorly suited, especially from an emotional resiliency perspective, to meeting my obligations.

When these feelings started getting stronger (around the end of last year), I talked with Sarah Bird about potentially taking on the CEO role one day, and letting me focus on more of my strengths and passions. At Moz’s last board meeting, we had a more serious conversation on that topic, and yesterday, in an impromptu Allhands session at the Mozplex, we talked about it with the company as well.

Sarah likes to describe the last 6 years at Moz as a road trip. I’ve been driving and she’s been in the passenger seat, navigating. But while I really loved having the wheel for most of the journey, we’re getting into terrain I don’tlove as much, and it might be time for Sarah and I to switch positions. She’ll be a different kind of driver and I’ll be a different kind of navigator, but we, the vehicle, and the passengers, will all be fine. 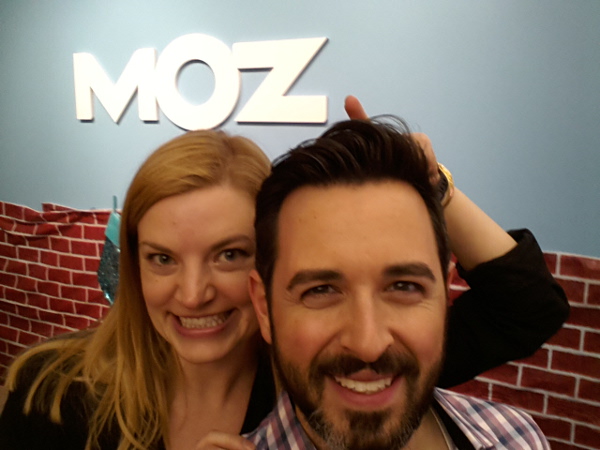 (Sarah and I at the Mozplex this afternoon)

There’s a lot of nuance and complexity around a new potential CEO, and neither nuance nor complexity are how people interpret a leadership change. We human beings like simple stories, and this story isn’t simple. So, I’d like to share with you an email I sent to the Moz team yesterday that helps lay out where we’re at:

Thanks so much for taking an hour out of what I know are very busy and important schedules. As promised, I wanted to follow up for those of you who couldn’t make it in person (and anyone who wants a refresher).

Quick Recap: For the last year, the board, eteam, Sarah, and Rand have been talking about changing my role/title and making Sarah our CEO. A lot of that stems from my personal passion around being an individual contributor more than a people manager, and in wanting to spend more time focusing on my strengths – marketing, product, evangelism, etc. and less on my weaknesses – organizational development, financings, board/analyst management, etc.

At the last board meeting, we chatted about potentially making that move as soon as January. There’s a board call to follow up on that topic next week. Nothing is set in stone, but given that I’ve written about this a bit in 15Five and talked about it on ocassion with Mozzers, we wanted to have a more formal discussion with a chance for Q+A.

Questions that came up today and some answers to them:

A) When will this happen?

It’s still up in the air, but we’ll know more after the board call next week. Brad and I are also discussing this privately in a call on Wednesday morning.

B) What will Rand’s new role be?

My role will actually be very similar. I’ll likely be spending more time in the weeds with product design, marketing initiatives, and evangelism (blogging/speaking). I’ll continue to represent Moz externally quite a bit. But I won’t be doing much people managing (only Nicci will continue to report to me), work on our finances, organizational development stuff, or recruiting/hiring of senior staff. I’ve also promised to write a book next year on startup marketing!

I want to change my title to “individual contributor.” Mostly because it reflects my belief that you don’t need to manage people in order to have influence, I love and want to promote the IC track/concept, and that titles are kinda BS 🙂

I will continue to be on the eteam and on the board of directors, representing internal shareholders (like y’all).

NOTE FROM RAND: This was part of the original email to the team, but obviously (now that this post is published) is no longer applicable, but is preserved here for posterity.

While we love to be transparent, this is a sensitive topic that requires a lot of input and care. It’s going to be hard to convey it right and not send the message that this transition is just because of a slowing growth rate this year (which isn’t the truth, though some of the emotional challenges I’m dealing with may have been accelerated). We also don’t yet have the full details on a plan, and it’s hard to capture the nuance effectively.

Sarah and I have talked about potentially having me write a blog post on this sooner rather than later to at least bring up the idea externally. We’d hate to have it leak.

Even when it comes to strategy, there will likely be very little difference to how we tackle initiatives. In fact, as Nicci and I were chatting today, I remarked that having the CEO title has, in my opinion, not helped me win any arguments with Sarah over the years. We’ve always needed to be on the same page or at least comfortable with each other’s decisions to move forward and I strongly suspect that will remain the case in the future.

What may change are some organizational elements – for example, as Sarah noted today, she’d like to have more regular company-wide town hall Q+A sessions where anyone/everyone on the team can ask questions to the eteam and expect a direct response.

E) Why does Rand want to be something other than CEO?

There are three big reasons (and lots of smaller ones):

#1 – As Moz has grown in number of people, I’ve often felt overwhelmed, out-of-my-depth, and emotionally challenged to handle the complexities of intra-team conflicts, morale, and organizational development issues. I want to do what I love and what I’m good at, and I believe I’ll be healthier and happier and Moz will be better served by me taking that role. Sadly, it’s not what a CEO needs to do at a 100+ person company and definitely not at 300 or 500+ (which we might be someday).

#2 – I don’t really ever want to be CEO of a public company, and someday, we hope Moz can reach the metrics that would give us eligibility for a public offering. Given that, it would eventually be the case that I’d want to step aside and have someone else take the reigns. Getting to do that now, years before an IPO, is a blessing, as it gives us time to get comfortable and means that external investors won’t be shaken by a leadership change.

#3 – I believe Sarah will be a fantastic CEO. She’s stepped up to every challenge that ever come her way at Moz, and I believe this one will be no different. I honestly believe she can do this job better than I can, and that means good things for all of us and for the value of our shares, too.

p.s. One of those smaller reasons is that I love the idea of Moz positively contributing to the awful inequality of women in the leadership role at technology startup companies.

F) Does this mean Rand will leave in the near future?

Hell no. It’s impossible to describe how much of my personal identity and ego and heart are connected to this company. You’d have to push me kicking and screaming. I plan to be here for a long time to come.

G) Is this because Moz’s performance in 2013 wasn’t as good as past years?

The tough year we’ve had has weighed more heavily on me than it probably should have, and that’s part of the reason we’ve been thinking about doing this sooner rather than waiting a little longer (we’d originally wanted to do some more hiring so Sarah would have fewer direct reports, and sorted out some other issues first, but we may bias to action on this one). But, if we’d had the best year we’ve ever had, we’d probably still be discussing this in the plan for sometime in 2014. In fact, Sarah and I had conversations to that effect long before the launch delays and invite list issues.

H) What kind of CEO will Sarah be?

A great one, and probably a better one than me 🙂

In all seriousness, it’s hard to say for certain, but it will likely feel very familiar and Sarah does a lot of CEO-type things today (maybe not as much social media CEO-ing, but that’s OK). I’ll let her tackle this one more, but she did so quite eloquently today at the Town Hall, talking about where her strengths lie (much more on the people, operations, financing, and scaling side vs. my product/marketing/industry strengths).

I) What if things don’t go well with Sarah at the helm?

We’ll figure out a plan. We’re certainly aware of many times in startup’s lives when a CEO transitions out and back in. I’ve gotten to talk to a number of CEOs who’ve made this transition and we’re doing all we can to prepare. To be honest, I feel very confident as Sarah’s been much more like a co-CEO these past 6 years than most people know. If she wasn’t a good fit, we’d have known a long time ago.

That said, the board will talk about it, and I will most certainly be here to help in whatever way needed, including filling back in should Moz need me in that role.

If you have other questions, please ask and we’d be happy to answer.

Why am I posting this? Mostly, because I’d hate for the news to leak out some other way and have it make people on our team feel uncomfortable or put upon. It would be much easier to wait until we have all the details ironed out – when Sarah’s taking on this role, how we’ll plan the transition, board dynamics, etc. – but you can’t always control messages exactly how you’d want, and in this case, it’s OK. Some people and some press outlets might misinterpret or try to take away something simple (and wrong), and that’s just how life will be.

I know I want to write more on this topic when I have the time, and I want to share more about Moz’s year (don’t worry, we’re still doing well, and we had nice growth, just not as nice as I wanted/expected), but there’ll be time for that in the future. For now, if you do have any questions or feedback, feel free to jump in the comments and I’ll do my best to reply.