There can be little doubt that the US unemployment rate is at historical highs. The US Labor Department does a good job compiling these statistics (though nuances certainly exist) and Google’s Public Data charts visualize this nicely:

Although many would say the cause of this unemployment stems from economic issues arising from the real estate and banking crises of late 2008, there’s a more insidious problem that’s less apparent – the education and skill level of the unemployed workforce vs. the demand for those skills.

Here in Seattle, WA, unemployment is not much lower than the national average. Thus, a business owner (like yours truly) might reasonably anticipate that finding people to hire will not be terribly challenging. This is where the irony exists. While thousands of workers are unemployed in our city, finding talented, qualified labor that can meet our needs is nigh on impossible.

None of these roles took less than 60 days of active pursuit, and several took more than 6 months to find and fill. Granted – SEOmoz is picky about who it hires, perhaps obsessively so. But this trend isn’t limited to us. Nearly every startup founder I’ve talked to is actively hiring for multiple positions, as are mid-size and large companies. After all, corporate profits are at a record high and the economy is growing (albeit at a modest 2% in Q3). Yet, unemployment is still a massive problem.

Why is this? How can there be a massive glut of unemployed, desperate-for-work individuals in the same country and the same regions where employers (like us) are equally desperate for talent?

I’d argue that the fault is systemic and institutional.

Businesses are desperate for tech-savvy, information workers with a concentration of talents around programming, computer skills, written communication, marketing/advertising, engineering and other advanced specializations (healthcare/medical, finance, mathematics, etc). These individuals are in short supply.

Meanwhile, millions of workers with skills that don’t fit these needs are starving for work, but can’t find companies that want them.

What could fix this problem?

• Re-training: If the existing unemployed workforce devoted several months to years to training on the necessary skills and knowledge to match their high-tech peers, this could help solve both employers’ needs and the unemployment issue.

• Restoration of Prior Demand: The jobs lost in retail, manufacturing, service industries, etc. could return if businesses decided to re-invest in these spheres in the geographies where they previously existed.

• Government Investment: Many governments (including the US following the great depression) have hired and employed for these positions on infrastructure and growth projects when the private sector didn’t perform.

• Private Investment in Non-Traditional Fields: Although investment dollars are returning to the private sphere, particularly in private equity and venture capital, these dollars are flowing to fields and companies that will compete for the “in-demand” talent not the “under-employed” part of the workforce.

Re-training makes sense on an individual level, but the more established you are in life: familial obligations, skills, economic demands, etc. the harder it is to devote time and resources to learning (which may not pay off in the near future unless you can ramp up extremely quickly and get lucky finding a position). In addition, the ability to get loans for school is tougher than it has been in 20+ years and the cost of post-high school education has skyrocketed. Retraining also won’t help you to network in your new field of choice – often an essential component of finding a position. You already know people and companies in your current niche, but the time to explore, discover, pitch and earn your way into a new one may be just as challenging (or more) than the learning process itself.

Restoring prior demand is possible, but it will take a very long time. Those analyzing the economy’s recovery have noted that productivity is up massively, profits are crushing historic levels and businesses (and the wealthy) are recovering without adding many new positions. All of these suggest that technology, software, automation and productivity improvements are reducing the need to add new people to the workforce. And yet, without higher employment, it’s very tough to stimulate increased consumer demand (which is likely why the current administration has a focus on exports to help grow the US economy).

Government investment makes some sense, and has worked in a number of cases in European and Asian economies (and in the past here in the US). However, the American political landscape is such that this likely won’t be in the consideration set. Data and lessons from history are far less powerful or influential than the narrative in the minds of US voters that “government intervention” and “government spending” are bad (or “evil” or “socialist” which also has terrible branding in the US). It’s certainly possible that additional government spending could have a negative impact if employed unwisely, but even when 90%+ of economists agree on a topic, it’s politics, not facts, that drive government policy.

Private investment is another possibility, but it’s largely thwarted by economics. The high-growth, high-return investments of the last few decades have an extreme concentration in technology-driven companies (regardless of the field) and these firms tend not to need the current group of “underemployed” workers.

So, are we/they screwed?

Although I don’t know the solution, and see barriers to every path, I believe we can innovate our way out of this. Then again, I’m an optimist by profession.

What I do hope is that going forward, parents will put their children on the path to earning the skills necessary to be in what’s currently an elite, under-supplied and overly-demanded workforce. I hope teachers, schools and politicians will recognize where investment is needed vs. not (the US spends the most money per child on education, yet has middling results at best, illustrated in the chart below): 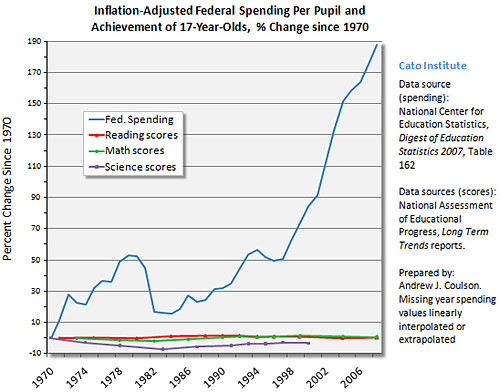 I hope the US can get a bit less ideological about policy (which is probably the most unlikely scenario) and finally, I’d love to see more businesses and investors putting money into sectors where the workforce is plentiful and lower cost (Zappos would be a prime example).

p.s. Many of the comments have focused on low compensation as being a likely cause for our recruiting challenges. While I could imagine this to be partially to blame, I’d point out that we generally pay 10-20% above numbers reported for major tech firms like these and are based in Seattle, which typically has 20-30% lower salaries than the Bay Area.