Every year that I’ve run SEOmoz, I’ve thought to myself “Who was that idiot they let run this place last year?”

_
It’s not that every decision I’ve made has been terrible, or that I’ve brought the company to the brink of destruction, but it is true that the quantity of unexecuted opportunity has outpaced our growth substantially, and that’s frustrating. Thus, this post will explore some of the hard-won experience and advice I’ve received over the last 6 years – the kind I wish I’d known ahead of time. I’m also going to try focusing on things I haven’t heard repeated in hundreds of other “startup advice” articles.

You Are Not the Customer

As a founder who’s also an active customer/user (which, in a lot of ways is a good thing), I foolishly designed our initial offerings to be what I wanted in the way I wanted them. This meant massively complex interfaces, piles of data, few recommendations or interpretation and lots of unnecessary clutter.

If you’re a founder and product designer, don’t neglect your instinct – you’re likely building a startup because you personally experienced a problem you wanted to solve. But, be wary of your level of expertise and avoid building a narrow solution that only you and a handful of advanced operators at your level will know how to use. The trend of design toward simplicity and accessibility in software happened for a reason – simple sells, simple’s usable and simple scales.

Get Comfortable with Firing

I’m the kind of guy who intensely likes and appreciates other people. I form bonds easily and make fast friends with those around me. In nearly every aspect of life, this has been great, but it’s made for some tough times in building my startup.

I haven’t always been as careful with hiring as I should have, and I’ve been extremely reluctant to let employees go, even when it’s been clear for a long time that the fit isn’t right. One of my biggest fears has always been the well-being of the employee, but in every case so far, folks who’ve left or those we’ve let go have landed on their feet and are happier in their new roles than the old.

When things aren’t working out between a startup and an employee, it’s better for both of them to end the relationship. I shouldn’t have felt bad for letting people go – they’ve gone on to find better fits, and frankly, for as long as things were going sour, my reluctance to act likely held them back as much as it did the company.

Most startups do a reasonable job of measuring KPIs (Key Performance Indicators) at the top of the business and even at the top of departments. For example, you might have topline revenue broken out by product, customer acquisition by channel and traffic by source. But even this degree of depth isn’t enough.

As we’ve matured, we’ve found that one of the most valuable activities our operations, finance and marketing teams can do is to have pinpoint accuracy on the metrics for everything. That means:

• Separating website traffic by “section” – breaking down the quantity of visits, entrances, sales and any other valuable action by the referring source (search engine keywords, third-party links, advertising, sponsorships, email, etc) AND by the area of your site it comes to. If you don’t separate the blog from the whitepapers from the free tools from the contact, about or product tour sections, how will you know the value of spending time working on these areas?

• Separating customers into cohorts – the signups you get when you’re running a “special” are probably already in your datasets, but every month, you’re improving your product, tweaking your message, getting different kinds of press and attracting your audience in a slightly different fashion. That’s why it’s critical to know your stats, in relation to traffic, on a monthly basis (or finer granularity if it can be done). I’ll write more on this specific topic in the future.

• Establishing first-touch analytics – virtually no one buys, gives you their email or downloads a whitepaper on the first visit. But 99% of analytics users treat the visit in which the action took place as the only one that earns the credit. That can make a business do very foolish things; over-attribute one channel while undervaluing another and you’ll be losing to the  competition  in no time. Get the story straight — and you’re two steps ahead of the game.

I should have built my company relying on deep metrics from day one, but instead I let it slide too long, and it’s only now that we’re building the metrics-driven culture we’ve long needed. I was lazy and cocky – I thought my intuition, which was always pretty good, was enough. “Pretty good” is not good enough in this business.

Quality Trumps Quantity (in Content, Features, People & Everything Else)

Nokia owned the market on cellphones until the Apple + Android showed consumers there was something better. Internet Explorer owned the browser, but Firefox and now Chrome are eating away at that lead day by day. Alexa used to rule competitive traffic analysis, but Compete & Quantcast showed marketers a better way.

It’s true in the content field, in hiring and in web app design, too. The power of market penetration, branding and ad dollars are  receding  in the face of improved consumer savvy, fingertip access to competitive research and the new kingpin in web software: reputation. 40 people a day on Twitter saying your product rocks is worth 400 blog sidebars running your ad. 1 genius product designer is worth 10 mediocre PMs wireframing and spec’ing. 5 weeks of amazing blog content will earn you a bigger following than an email list of 500,000.

If you can recognize remarkable quality, you can hire for it, filter for it, strive for it and build towards it. If you can’t, or don’t have the resolve to demand it, eventually, you’ll lose out to those who can and do.

When I built SEOmoz’s subscription platform, I thought we needed one of everything. Rather than make one or two amazing products, I had us build 25 mediocre solutions. And rather than improve on a “pretty good” solution until it was magnificent, I’d move us on to the next “must-have” feature or tool. It took a long time to see the error of my ways. We’re finally catching up and producing remarkable stuff, but it was a hard-earned lesson.

As a startup founder, you’ve likely got some impressive talents. You might be a remarkable blogger, a great speaker, a well-connected deal maker or a phenomenal engineer. But, no matter what, you’ll reach a time in your business where you can’t be “that guy” for the company. If you continue to be a load-bearing beam in your startup’s tower, you’ll never be able to scale, grow and join the top of the skyline.

One of my biggest frustrations in the first few years of SEOmoz’s growth was that I was shifting time away from doing hands-on SEO myself. I was good at it, I learned from it, I could blog about it. It let me see problems and identify tools and software I wanted to build to solve those problems. But, to grow beyond a tiny company, I needed to step back, take on other challenges and let others fill that role.

Here’s the toughest part – even though all the advice says “surround yourself with people smarter and more capable than you,” the truth is that in some areas, you may never find that person. Many of the founders I’ve met have a unique gift for an area of their craft that’s unmatched and might be unmatchable. But if Larry Page & Sergey Brin refused to run a business in favor of writing algorithms, or if Mark Zuckerberg wanted to add features instead of build a team, Google and Facebook would be nowhere.

I wish I could take back some of the hundreds of hours I poured into grunt-level work, especially after the company had started to mature, and given it to team building, training, networking and learning more about the tasks ahead of me rather than the stuff I was already good at.

I can still recall the first time someone attacked me personally on the web for my work at SEOmoz. It felt like getting punched in the gut – like having my insides torn inside out with no relief. I couldn’t sleep, could barely eat and couldn’t wrap my head around why this was happening. It took years before I could shrug off the attacks of people I hadn’t met, and years more before I could ignore the anger and hostility from people I thought were friends.

But in talking to other founders, investors and individuals who’ve built big brands on the web, I learned that no one – no matter how nice, how friendly, or how right they are – can avoid attracting haters. That is… unless you don’t build something that matters.

The negativity and anger and insults hurled anonymously across the web and behind your back to partners, colleagues and friends are par for the course. If you don’t have haters, you’re doing something wrong, or, you’re doing something that doesn’t matter. And believe me – it’s far better in the tech startup world than it is in virtually any other field of endeavor. What passes for “haters” in Silicon Valley wouldn’t even warrant a mention in more political, established fields.

Now if someone could just kindly print this out and mail it to me in 2003, I’d be much obliged. These flux capacitor schematics should help: 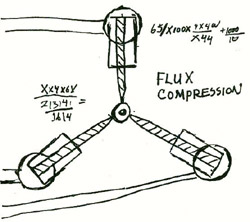