Wil Reynolds is one of my closest friends. When I reflect on people I love, respect, and want to spend time with (even when I’m in my introvert state), Wil is on the top of that list (along with his wife, Nora). But, that doesn’t mean we see eye to eye on everything.

In an on-stage interview last month, Wil brought up a conversation we’ve had in private a few times around diversity in the SEO and web marketing fields, specifically about the gender balance between men and women (although we also discussed other kinds of diversity, too). You can watch the video recording below:

(via SEER’s recap of the event)

In the interview, I didn’t do a stellar or comprehensive job of describing the reasons I hold the beliefs that I do, nor why I and Moz work so hard to promote diversity. In this post, I want to try to expand on those ideas a bit.

Before that, I want to acknowledge and pay respect to Wil’s position on the matter. It can suck to feel like the reason you (or anyone) might be selected for something (a job, a speaking gig, a contract, entrance to a university, etc) has anything to do with a non-merit-based factor. The “I don’t want to be a token” and “I don’t want to be selected for my race/gender/background” arguments are both logical and, at least to me, deeply empathetic. We all want to live in a world where there’s no question about why they picked you – you were the best, most qualified candidate, full stop.

But we can’t live in that world yet, because we haven’t all had equal privilege and opportunity. Some of us start with clear, unfair advantages rooted in history. Failing to acknowledge that distribution and pretending there’s an equality of privilege is a form of willful ignorance that maintains those biases. 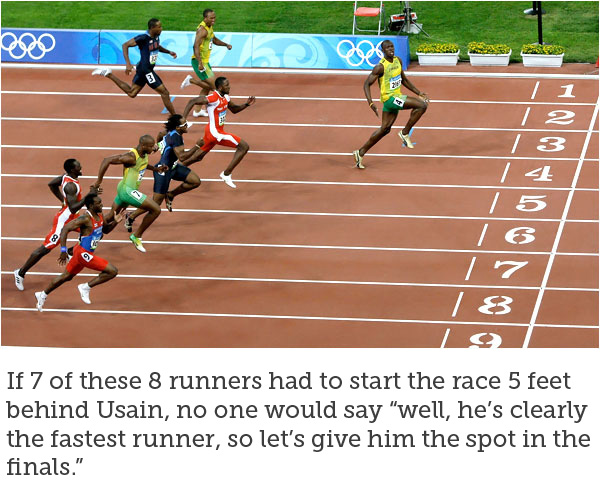 For those who might be skeptical, the science is in, and it’s as clear as human-caused climate change or the safety of vaccines. I’d prefer not to make this post a defense of those points, and there’s plenty of resources out there to do that (e.g. Gender Bias Extraordinarily Prevalent in STEM Careers, What Poverty Does to the Young Brain, Telling Poor, Smart Kids That All It Takes Is Hard Work to Be as Successful as Their Wealthy Peers Is a Blatant Lie, The Secret to Being Rich is Surprisingly Simple, How the Hiring Process Favors the Elite, White Men Are Everywhere, etc). Just think of it this way – if you were attempting to honor the best doctors in the U.S. 75 years ago, would there be any chance someone other than white men would have even been considered?

Suffice it to say that we know we’re not living in a world in which everyone gets the same, fair chance, and that where you were born, to whom, and the socialization and/or wealth of your upbringing have the power to bias your future immensely. Even when overt, big “R” Racism or big “S” sexism aren’t at play, the impact of microagressions and unconscious bias have an effect.

Across the landscape of technology and web marketing professionals, there’s tremendous opportunity for financial security, work-satisfaction, and growth. We are blessed with great jobs, good salaries, remarkable benefits, and a field where labor holds more power than employers due to ongoing higher demand vs. supply. I want those opportunities extended to everyone who’s interested – not just the groups of men who currently dominate the field.

When I look around the room at a conference, in a meeting, or during a networking event and all I see are people who look like me (white dudes), I’m deeply uncomfortable. ~31% of all Americans are white men, which means there’s something weird going on if a conference has 30 speakers, of which 27 are in that group. Conference organizers and some attendees have argued to me that perhaps those 27 white dudes are simply the best speakers out there – better than anyone else they could have selected to present.

I have two counterarguments:

In both cases, it’s my view that what’s needed isn’t a “well, that’s just the way it is” attitude, but one of “let’s do something to address and fix this.”

At Moz, we address representation problems at conferences and events with intentional effort. Years ago, when we first decided to consciously tackle the gender ratio issue, I remember sitting in a meeting room with Jen, Erica, and others, writing names of speakers we recalled impressing us at other events on the whiteboard wall. Perhaps unsurprisingly, that list was mostly men. Why? Because other conferences in our space (and Mozcon itself in previous years) massively over-represented men among speakers, so that’s who we’d seen and remembered (credit to events like SMX with their Janes of Digital program and others like Searchlove who’ve been making conscientious efforts on this front).

But, when we recognized that, and consciously forced ourselves to dig deeper and intentionally list women speakers (as well as bloggers, writers, social sharers, and others in the field who’d impressed us), we noticed that there were plenty of great candidates of both genders. So many, in fact, that we couldn’t possibly invite all the ones we’d listed even if we doubled the number of speaker spots. Thus, we tried an experiment – we set the gender balance to 50/50 and invited half men, half women to present.

That year’s Mozcon scores were the best ever (w/ only 11% of attendees self-reporting as women).

The next year, we did it again, and the scores were even better (w/ 20% women attendees).

This year, we invited 50/50, but lost a succession of invited women speakers to scheduling conflicts, and have only 12/26 women speakers (still pretty close).

I don’t think it’s a stretch to say that during the period when we intentionally biased to diversity, we not only grew the diversity of our crowd (and sold a lot more tickets), we also created one of the best conferences in the web marketing world, with some of the highest-quality, most advanced, most well-regarded content and speakers in the field. To anyone who argues that selecting the best speakers and selecting a diverse group of speakers are mutually exclusive, I can call bullshit with the evidence to back it up.

It’s not just the content quality, though. Honestly, I would have been perfectly willing to continue our gender balance experiment even if scores and comments had been more negative, because I believe that in the long run, the situation will not get better on its own. Intentional efforts like ours are one of the best ways I know to rectify a historical disadvantage that persists. Moz is blessed with an amazing community, team, profit margin, and scale – we can afford to lose money on Mozcon or to have sold a few less tickets in order to build up opportunities for women speakers to speak, and for audiences to find a conference with greater diversity.

That said, while I’m proud of the team’s work on Mozcon, I’m not so proud of our work in the field of hiring more diverse technical talent to the Moz team. Like almost every other company in the software startup/tech world, we have a huge challenge recruiting and hiring technical women. Only ~10-20% of technical roles at the company have been filled by women (historically and today). That sucks.

When it comes to hiring, the law doesn’t permit us to be intentional about balancing our technical workforce to 50/50. And, to be transparent, as of a few years ago (when I was more involved in our recruiting program), even if we’d hired every single woman candidate who interviewed for a technical role, we’d still be way below 50%. Those numbers, and broad statistics like those below, make me believe we’ve got a pipeline problem on our hands.

To remedy this situation, we can’t just work on Moz’s own recruiting efforts and our environment’s appeal to women candidates (though we certainly do need to work on both), we need to expend energy to help encourage more women get into the field. Right now, for us, that means supporting organizations like Girls Who Code and ADA Developer’s Academy (whom we actually host in our Seattle offices). It means that Sarah Bird (our CEO) speaks at a lot of events for and about women in technology. It means we create and evangelize programs and benefits for women internally and externally (e.g. our parental leave policies, work-remote flexibility, paid-paid vacation, health benefits, private rooms in our offices for nursing/other parental activities, etc). And, it means we recognize, talk about, and actively work to fight against unconscious bias.

Our VP of HR, Rebecca, shared with me a (so far 3-page) document that helps document and show progress on all the ways we’re trying to improve and support diversity that I’ve captured part of below:

This is a work-in-progress, not a finished product, so please judge the screenshot lightly!

One thing I think I particularly failed at in the video/interview was explaining how diversity helps Moz. That’s simple – it brings a broader base of opinions and a broader style of thinking, as well as greater perspective on a huge variety of issues. It’s often hard to know when you’re benefiting from diversity (or when you’re being hurt by lack of it) because the input given by people is seldom directly attributable to their background, but I’ll give five short examples.

In all of these cases, diversity improved our empathy internally and externally. The variety of people in leadership and decision-making roles, as well as on individual teams helped us make a better, more accessible company and product. I believe diversity isn’t just the right thing to do for the world; it’s also the optimal thing to do for the long-term success of an organization (and there’s plenty others with great data to back that up).

I know that we have a long way to go and that we’re not doing enough today. But I wanted to share more about my/our beliefs about this issue and some of the things we’ve done.

In the video, Wil talks about how he and SEER have, unintentionally and accidentally, built a company that’s 60%+ women. I love that, and I agree with Wil that it’s an amazing thing. I think his early hiring of women in leadership roles (intentional or not) contributed to women feeling more comfortable and welcome at the company, and I suspect he recognizes that, too. My/Moz’s hope with both Mozcon and with efforts to diversify the field of candidates in technology and web marketing, is that someday, we won’t have to think about this issue – that the vast majority of companies in tech/web marketing fields will unintentionally, with no added thought or effort, build diverse teams. That’s a long way away, but the path to getting there starts with the efforts we make today.

A huge thanks to Geraldine, Erica, and Wil, who read over this post prior to publication and contributed feedback and edits.

p.s. Sadly, this post has attracted a number of inappropriate comments, which I’ve deleted. I’ve changed the settings in Disqus to restrict non-verified emails, and will try to keep monitoring these carefully, but may need to close the discussion if it keeps up. I do suggest reading Ron Bronson’s response here, which provides some unique perspective.