For the first few years that I spoke at conferences in the search marketing field, I consistently wore a single pair of yellow shoes. Initially, it was so I could be recognized by the many people I’d formed friendships with on the forums and blog comments of the SEO world. In time, it grew to become a personal branding piece, and over the past half decade, I’ve been asked by many conference organizers to wear the shoes specifically. 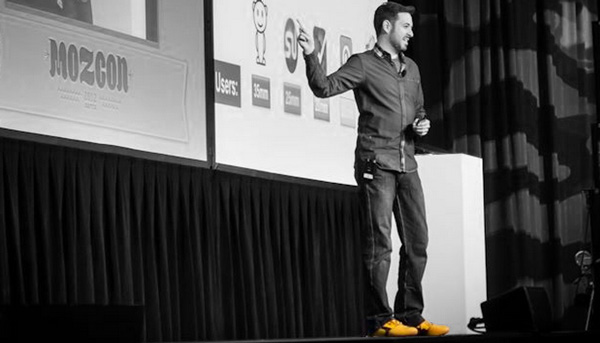 (my trademark yellow Pumas on display at Mozcon 2012; incidentally the same ones I wore to my first SES conference in 2005)

Starting in ~2007, I got less and less comfortable in yellow shoes (at least at industry events). I felt like I was going down a path of personal branding that would compete with the SEOmoz company brand. As an entrepreneur, personal brands are certainly helpful for all kinds of startup-related marketing efforts, but it’s generally a terrible idea to cannibalize the company brand with your own.

But lately, I’ve been questioning that assumption and thinking I might make yellow a more consistent part of my wardrobe again (and it’s definitely not because they’re easy to match – they’re not).

At the core of this reconsideration is the trajectory and long-term hopes of the company. In a scenario where SEOmoz might be sold to an acquirer, having a personal brand closely tied to the company would probably mean a lower overall price. This is because any single point of failure, including the risk of a single individual closely tied to a large amount of perceived value, drives the overall enterprise value down. But in a scenario where an IPO or a long, independent path is expected, there’s less risk (at least, so long as the person behind that brand is planning to be with the company long term and vice versa).

From 2005 until ~2010 I talked about the eventuality that I’d need to step aside as CEO and be replaced by someone more experienced and qualified. The executive team and the board haven’t talked about that much over the last couple years, and I suspect the unspoken truth is that I’m probably going to be the guy long term, or until voluntary step aside (or do some really dumb stuff – knock on wood it’s not that one).

If you’re in the startup business or trying to grow a company of any kind, you should be weighing the value and ROI of building a personal brand against the three challenges above.

Obviously, the yellow shoes are only a small part of personal branding, but for me they, along with this blog, and my participation in communities outside of the pure inbound/web marketing sphere are the big pieces of what’s separate from Moz. It’s a balancing act determining where to put how much effort, but I think I’m going to, at least, put back on the shoes and try that out for a while. Perhaps it’ll be the first A/B marketing test performed with footwear. 🙂

p.s. For a good perspective on how non-founder personal branding can be perceived as damaging (vs positive), I’d suggest Noah Kagan’s excellent post from this weekend on his dismissal from a very early Facebook. At some point on this blog, I’ll try to write about the challenges of building non-founder personal brands inside the startup, which is something we’ve tried with many Mozzers over the years.